It's been an eventful day to say the least, but despite all the rushing around, appointments, emergency room & work I have to say it's been a great day. I've really decided to live a great life despite what's going on around me. Since its up to me how my day goes, I'm finally choosing to make it great. Now don't get me wrong, I had my moments where I had to collect myself, but they were short and with grace I pulled through.

The highlights was the Little Guy. He's been getting Time Out like a baby on a roll! Since his fever he thinks the world revolves around him and he need everything his way. The only way to change his thinking is Time Outs in his playpen. Lucky for me it's been working, but that's not the part I want to talk about.

You know how every mom thinks her child is the best, most awesomest kid ever? Well, I'm just like the rest of the moms. He is just so stinkin' cute and funny lately. His new thing is to sit inside of the refrigerator. He just loves getting inside of it and closing the door on himself. I don't see what's so cool about it, but it does make us giggle at him.

Also another one of his 'Spots' is sitting at the table. He uses my camera bag (I keep it under the kitchen table bench) as a stool to climb on the bench so that he can reach whatever food he see's on the table like cake. He also does so much more, but I've been trying to establish a set working schedule and haven't been doing much else other then work. Good news is I work Monday-Friday from 7pm until 10pm. Not bad since baby goes to bed at 7pm.

I am having an Easter promotion and for the promotion I needed baby chicks. Guess whose having chickens in their yard? Me! We'll see how it goes though. If they don't fall into my plan of a beautiful yard where we can spend out summer's then the chicken are dinner! Lol, no I haven't figured out what to do with them, but Augustin just loves the little guys. I think this might be the closest we will get to a dog (I want one). 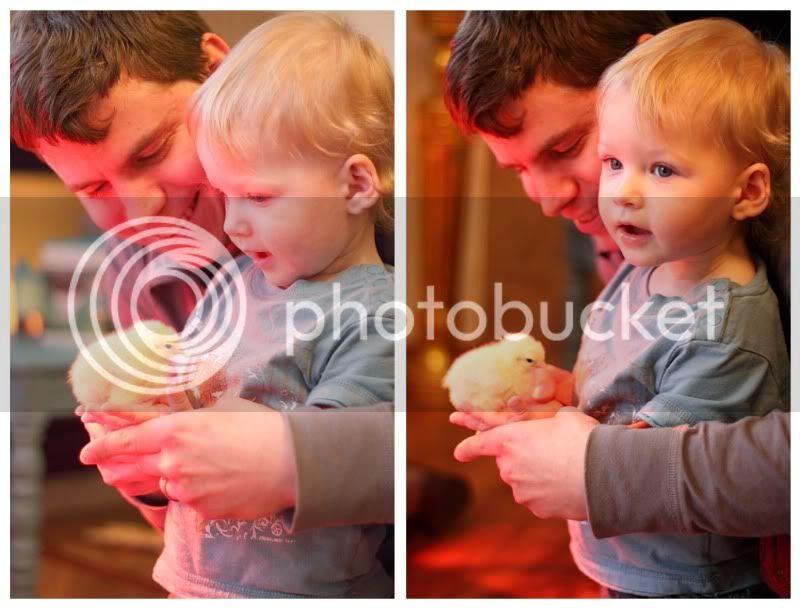 Aren't they just the cutest little things ever?!

Posted by Annetta Bosakova at 10:01 PM